There are times when life really throws a monkey wrench into a person’s plans. I had planned on completing 36 additional figures by March 25th and with the figures I have already completed that would have given me at least 2 warbands to play in the inaugural Colonial Adventures Game.

However, I caught the flu. Flu season has come late to Texas & I caught a touch of it. I was too sick to work, so I thought I could get some painting done. Wrong! Not only did I not make any progress, but I had to redo a lot of it. Then I thought I could just go to the store & play. There were plenty of guys bringing plenty of figures to loan to those who didn’t have theirs painted. Well, when the 25th arrived, I still felt bad & decided to stay home instead.

I switched from spray primer to gesso a couple of years ago. It works great, but here’s the caveat: You have to let it dry & cure for 24 hours. I use an old craft brush that has a little stiffness so I can push the gesso into all of the nooks & crannies of a miniature. Gesso is composed of chalk, acrylic paint, & glue. You brush it on heavily & it shrinks to bond with the miniature as it cures. Again, you have to let it dry at least 24 hours.

It comes in 3 colors that I know of, white, black, & gray. I use gray simply because it is easier on my eyes than the black or white. Sometimes, you may need to apply a second coat. Sometimes the first coat is thin in spots & at certain angles the metal will show through. The real secret to using gesso is to let it dry for at least 24 hours.

And finally, some of the figures I finished this week: 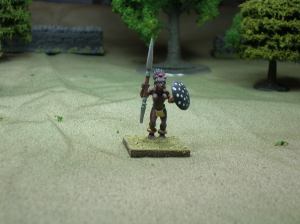 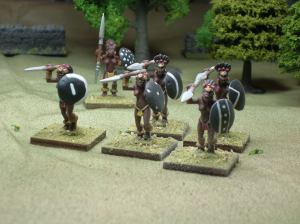 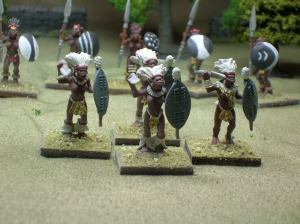 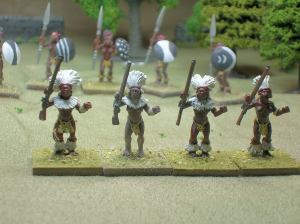 3 thoughts on “Gray Ladies, the Flu, & Some Completed Figures”