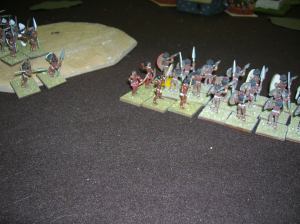 I played in my first Colonial Adventures game today at the Area 51 game store in Grapevine, TX. It was a fun game even though we are all still learning the rules.

The quality of the pictures won’t be as good as the past posts. I used my camera in the game store without a tripod & additional lighting. The camera’s flash flashed with every shot, so some of the colors may not look as good as they did in person.

The Area 51 game store is fairly easy to find on Main Street in Grapevine. The only problem I had was that the mapquest instructions had me turn left onto Main Street when I should have turned right.

We selected the “Raid: Defender” scenario since we had far more tribal Africans than British. It was a kind of Rorke’s Drift type of scenario. There were 2 20 man platoons of British soldiers. Dale commanded the platoon in khaki & Jim commanded the platoon in the red coats. I commanded 2 20 woman bands of Women Tribal Warriors & Jeff commanded 3 20 man bands of Zulus. The goal rolled for the raiders was to drive all of the defenders off of the board. With the scenario special instructions, we rolled on the raid table & the raiders got to deploy 24″ from the closest building & we got to activate first.

On the first turn, the only thing the natives could do was to advance. This provoked the enemy into firing. They must have been nervous, because only a single Zulu warrior was hit. However, their nerves would settle & the firing would become deadlier. The enemy fire provoked one of my bands to charge the enemy position behind a set of mealy bags.

The next 2 turns were horrible for me. The activation dice rolled indicated that only native units with a Rep 5 or higher could activate. That meant that none of my units could activate. I could only react to the melee. Jeff, however was able to maneuver his bands & charged one band into the mealy bags between the 2 buildings.

For several turns, there were few casualties on either side. Both sides passed their reactions tests with a resounding “Carry On!” Finally, I was able to activate my units. Jim had been feeding more & more men into the melee in an attempt to outnumber me. But this time, I was able to charge my Rep 3 unit into melee. The Zulu had breached the mealy bags & another Zulu band charged the troops in the far building. It looked like the natives were going to overwhelm the British.

The apparent victory vaporized as a withering volley fire erupted from the building. Three women dropped dead, but 4 more ran away. In melee, the women gave tit for tat (maybe that’s not a good expression to use). Anyway, they gave as good as they got fighting wise, but were losing the morale battle as more & more women started to run away. Jim’s feeding more & more troopers into the melee would soon pay off, for soon he would outnumber me if I couldn’t cause more British casualties or break them from that position.

Meanwhile, the Zulu had put enough pressure on the other British platoon that the British broke off from melee & formed a firing line in the compound.

Unfortunately, we had to call the game at this time. It was an interesting point at which to call the game. If Jim could break my units, he could flank the Zulu & bring aid to Dale’s platoon. If the women could hold, the Zulu would have a good chance to overrun Dale’s platoon & then strike Jim’s platoon in the rear. I know the Rep 3 unit probably couldn’t hold out for another turn. But my Rep 4 unit? Who knows if they could have held or not.

It was a fun game. Yet there are still areas in the rules that we struggled with. It will probably take another game or 2 to iron things out where that it will run smooth.