Whew! Texicon is over for another year. This year the convention moved from Ft. Worth to Grapevine. The move was to place the convention in a more central & easier to get to part of the Dallas-Ft. Worth metroplex. There was plenty of room in the Grapevine Convention Center. The convention itself continues to grow.

This year added a huge Warmachine & Warmachine Hordes tournament. The tournament organizers did something I’ve never seen before: themed terrain. Each of the tables had terrain that looked like it came straight out of artwork for the Conan novels. In fact, prior to the beginning of the tournament, they played the Basil Poledouris soundtrack to the original Conan the Barbarian movie. The terrain was fantastic & I took pictures for inspiration in my own terrain building efforts. 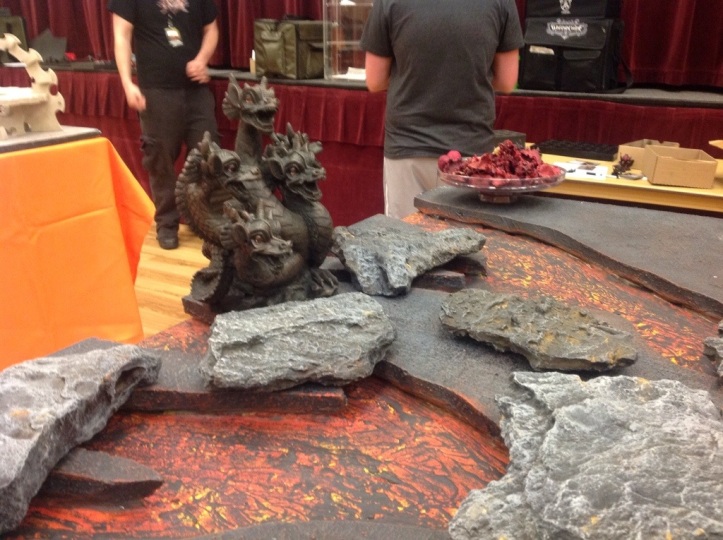 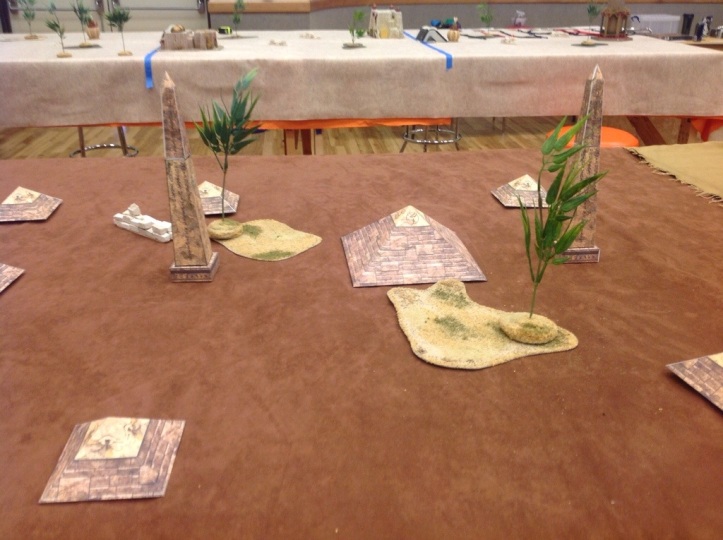 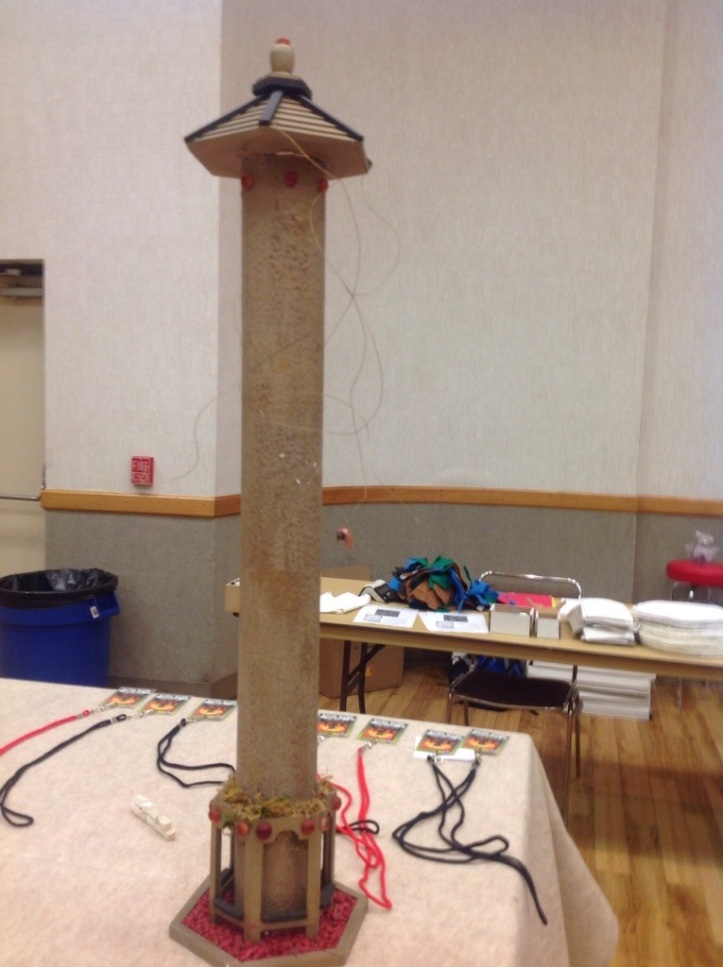 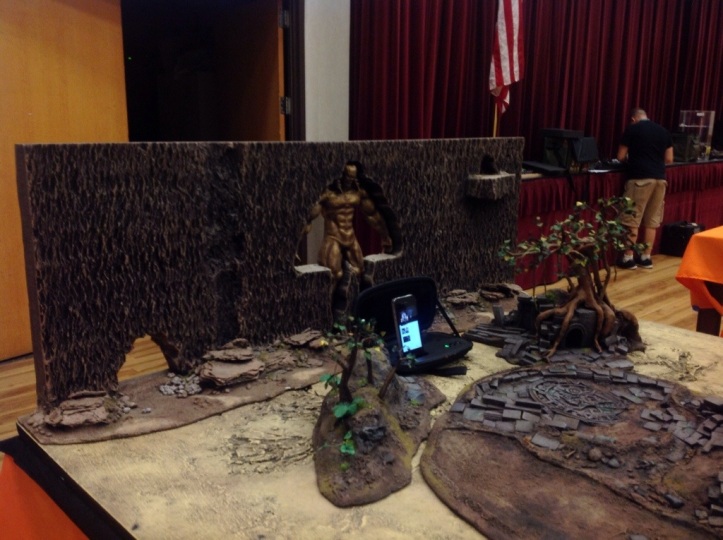 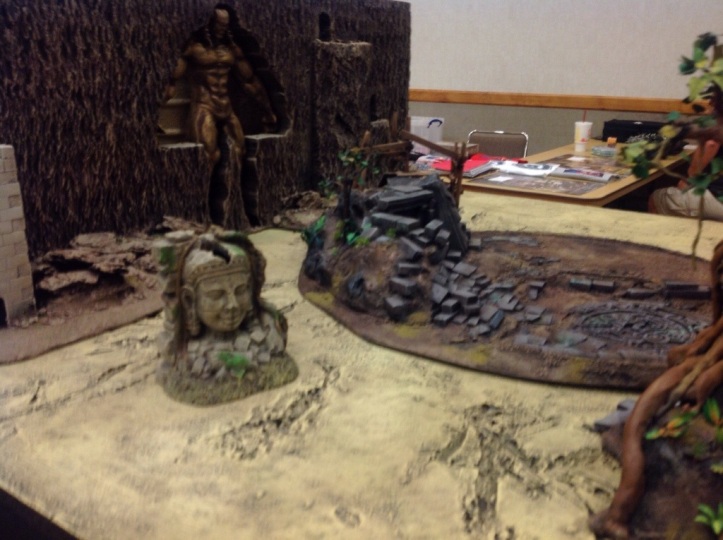 Another game that caught my eye was Jeff Lawrence’s 1815 Waterloo 3D game. It was a 28mm game & the figures were gorgeous. Plus, the British had lots & lots & lots of artillery!

I stopped by the Warmachine demo table & learned the basics of Warmachine Hordes. It’s a different kind of game than what I generally like, but it was fun. It was just a little too much of a min-max type of game. 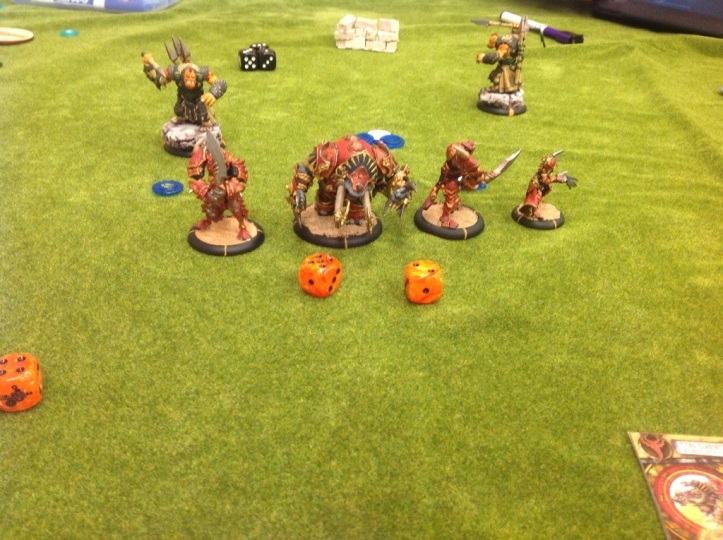 One of the things about Texicon is that as it is still growing we game masters will usually have a session that is either lightly attended or has to players at all. The exception to that has always been the Battletech games. There are always a lot of people playing Battletech.

There were games in other sizes than 28mm. There was a 10mm Napoleonics game, a couple of 15mm American Civil War games, a 54mm American War of Independence game, some very small WWI biplane games, & 15mm WWII Flames of War games. Some of the games looked interesting, but one or two of them looked more like lessons in geometry. 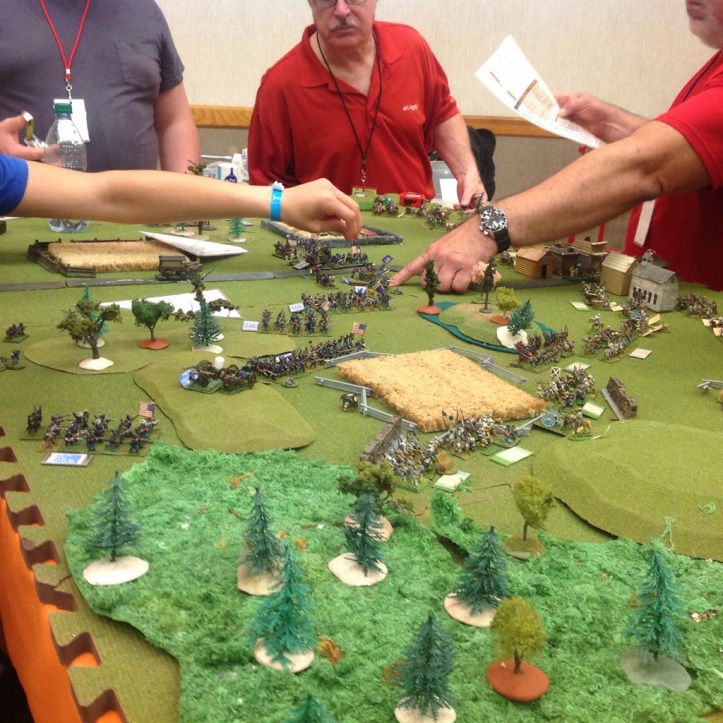 Jeff Lawrence put on another beautiful game, “Clyde, Let’s Go for Some Ice Cream”. Yep, Bonnie & Clyde stop for some ice cream in Joplin, Missouri. The ice cream parlor just happens to be across the street from an enticing bank. 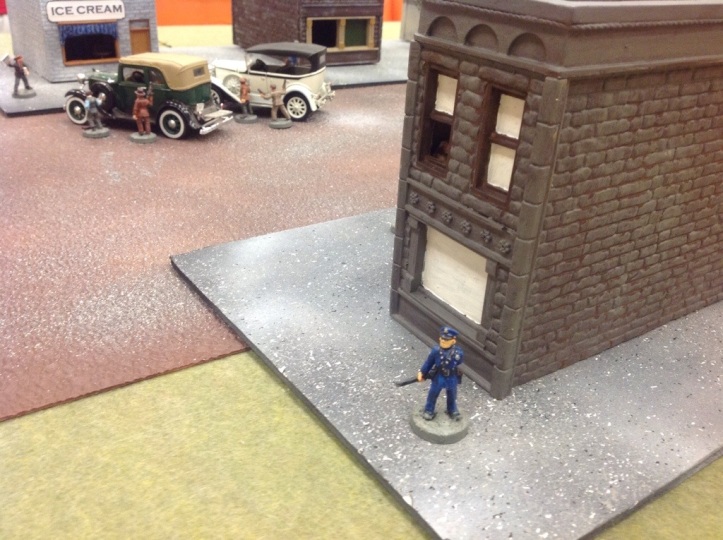 Like the Battletech game, every year the single session of the Dr. Who game attracts a lot of players. Jamie Matthews ran the game with his awesome urban terrain.

Unfortunately, I don’t have but one picture of Mike Miller’s “Tarzan & the Battle for Opar” game. I was too busy playing the game. Mike was the Game Master, Lance ran the Oparians & all of the jungle creatures, Scott played the Boer, Ron was the German, Gary was the Frenchman, Dave was Tarzan, & I was the ravishing Belgian double-agent. None of us got any treasure. The Boer, the Frenchman, & the German all met horrible deaths. I was swept off of my feet by a great ape & carried off into the jungle. And Tarzan, with his great sense of nobility, abandoned the opportunity to defeat his enemies & left La’s palace to rescue me. It was a very fun game.

Now we come to my game. I ran a colonial game this year. It was a safari filled with lions, baboons, snakes, giant spiders, & even Kong & a Wooly Mammoth. It had villagers, witch doctors, bushmen & lots & lots of angry natives. I was too busy being GM to take pictures during the game, but here are a few of the table before the game began & a few during the intermission. 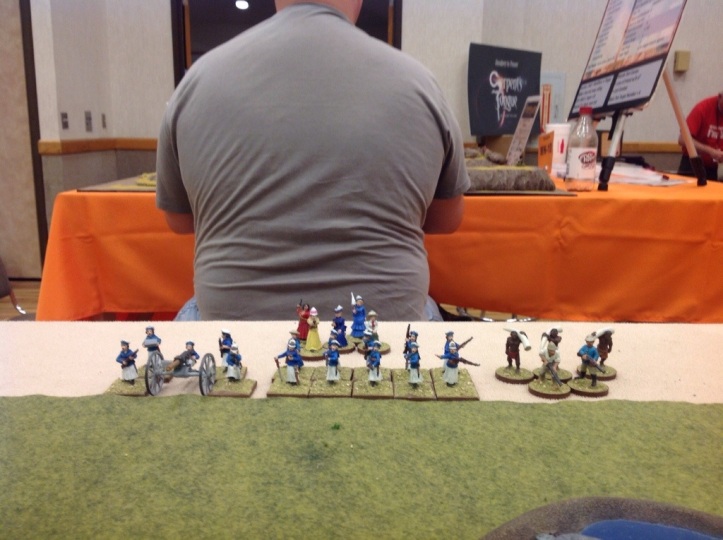 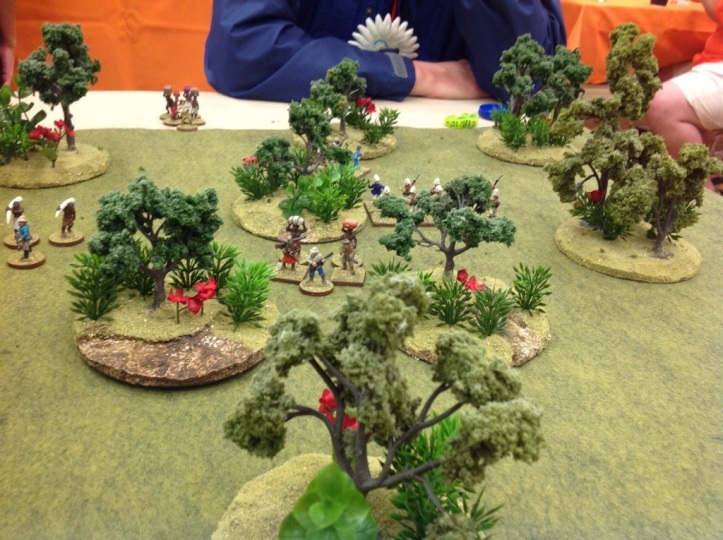 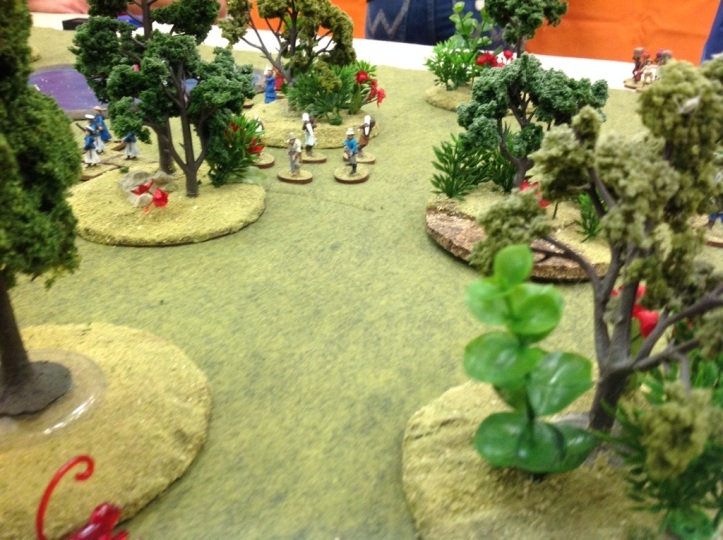 It was a fun convention this yeah. I enjoyed it a great deal. The only, only downside was that on the first night I wore a period costume. I wore an Edwardian Walking Ensemble complete with sun helmet. But those shoes killed my feet. There were so sore when I got to the motel I was nearly in tears. I had planned to wear the costume for the entire convention. But I wisely chose tee-shirt, shorts & flip-flops for the rest of the convention. I did wear the sun helmet for the whole convention. I think there’s rule somewhere that game masters are supposed to wear hats.