The fighter was now in the upper atmosphere racing toward the ground and the sunrise at the same time. Pearl was still miffed at being referred to as a “project”, but she had not had the opportunity to confront Azumi about it. As gravity returned, the baby and her organs had rearranged themselves. The baby was now resting comfortably on her bladder. She couldn’t shift her position in the narrow cockpit, so Pearl was very glad she had opted for the diaper when putting on the orbital flight suit earlier. There was a sudden brilliant flash on the horizon. Within seconds the radio beeped.

“One Niner Alpha, this is Lannah d’Tule command. Come in, please.” announced the communications officer.

“This is One Niner Alpha. What is it Lannah d’Tule?” asked Azumi.

“Commander, we have monitored a large explosion on the surface of the system’s star. At first we thought the star would go supernova, but instead it has ejected a very large amount of plasma.” replied the communications officer.

“Commander, this is Captain Yuri Xinstar. You have eighteen minutes to get that craft down to the surface and to find shelter before everything is bathed in radiation and all electronics fail.” interrupted the Captain.

“Roger that, Lannah d’Tule. Will you be jumping out of the system?” asked Azumi.

“No, we’re going out beyond the asteroid field and hide behind the gas giant, New Haven V. It’s big enough to shield us from the massive solar flare this thing has.” replied the communications officer.

“Azumi!” cried Pearl. “You’ve got to warn Nina. This would destroy her.”

“I’m sure New Hope City will sound its own alarm.” said Azumi.

“No! You warn her now! If you want me to be a successful ‘project’, you will do this for me, Azumi.” demanded Pearl. “She’s monitoring the nets anyway. Warn her.”

“Ok, Pearl, just settle down.” said Azumi. “Lannah d’Tule, this is One Niner Alpha. It is imperative that you apprise Nina Lemay in New Hope City of the situation immediately.”

“Roger, One Niner Alpha. We’ll get on it right away.” replied the communications officer.

“No, we know Nina has been monitoring our communications since we left the planet.” said Azumi.

“Besides, her number is in your file.” added Momiji.

The next two minutes were agony for Pearl as she worried about Nina’s safety. The fighter continued its rapid descent. Momiji was confident that once they got into the caverns, they would be safe from the effects of any radiation. The com beeped. “One Niner Alpha, this is the Lannah d’Tule, do you read?” asked the communications officer.

“This is One Niner Alpha, go ahead Lannah d’Tule.” replied Azumi.

“Commander, Nina Lemay was contacted. She said she, Vivian, and others in the shopping strip were going to the sub-basement of the Hyperion building down the street.”

“Hear that, Pearl? Nina is going to be safe.” said Azumi.

“Thank you. You don’t know how much this means to me.” said Pearl.

“Lannah d’Tule, you have our heart felt gratitude.” Azumi said over the com.

“Roger that, One Niner Alpha. We are leaving orbit and will be in touch when all of this clears. Have a safe landing.”

“Roger, Lannah d’Tule, thanks again and we’ll see you when we see you. One Niner Alpha out.” said Azumi.

“The caverns are dead ahead, Commander.” said Momiji.

Every com device whether the radio or mission tablet was filled with chatter. Units trying to get clarification on the emergency or units trying to get direction as to what to do. Lt. Marc Probst looked up from his tablet and saw ten silent faces looking at him. Staff Sergeant Kate Lemay stepped beside him and said in a low voice, “Sir, with the declared emergency, you are no longer an observer of my squad’s readiness. Sir, you are now in command.”

He blushed. “You are quite right, Staff. What do you suggest?” asked Lt. Probst.

“Well, sir, we rangers are always prepared for a contingency. I suggest we start with ‘Plan B’.” replied Katie.

“Yes Sir! Listen up everyone. Plan B! I want everything inventoried and ready to move out in five.”

Suddenly there was a flurry of activity. Lt. Probst watched in amazement as some of the women removed their tunics to reveal magazine clips taped to their undershirts. The women opened everything and dug deep. The large first aid kit yielded a magazine clip. A spare case of rations revealed a full belt of ammunition for the squad’s six-barreled mini-gun. Another belt and a spare barrel was found in the spare tire compartment of one of the LTVs, Light Tactical Vehicle. Within five minutes everything was neatly packed away, including the “laser-tag” gear for mock combat. The squad was fully armed and ready for action.

“Yes, sir. Never leave home without it.” grinned Katie. “Sorry, we didn’t have a magazine for your rifle, sir. But Gryphon IV uses the same caliber round as Star Army. If we each pull four rounds from our magazines and give them to you then we will all have thirty-six rounds each. That’s in addition to the two nine meter belts of ammo for the mini-gun. I would give you half the rounds from my sidearm, but I’m afraid they are of a different caliber.”

“That’s amazing, Staff. What else do we have?”

“We have a dozen flares, six smoke grenades, two red, two yellow, and two green. We’ve also got one anti-personnel mine. We have two long range com-links, three scanners, three command tablets, and one recon drone. Everyone has local com-links, soft body armor, low-light visors, and radiation suits if we can’t find a place to hunker down.”

“Yes, sir, we find a place of relative safety while we plan our next moves.”

“We’ve got incoming aircraft from the South!” shouted Private Amy Belo looking up from one of the scanners.

Everyone looked nervously to the South. Katie picked up a pair of binoculars. Lt. Probst stepped to her side. “What do we have, Staff?” he asked.

“I believe it is Xeog, sir. I’ve never seen one in person, but it matches the recognition charts.” she said handing the binoculars to the lieutenant.

Lt. Probst looked through the binoculars at the approaching fighter. It had the tell tale blue, black, and gray mottled camouflage used by the Xeog. The plane was descending rapidly with flaps and landing gear down. “You’re right, Staff. It’s a ‘scalpel’, a heavy fighter. And she’s in a hurry to get on the ground.”

“I don’t blame her, sir. We’ve got fifteen minutes before all electronics fail.” 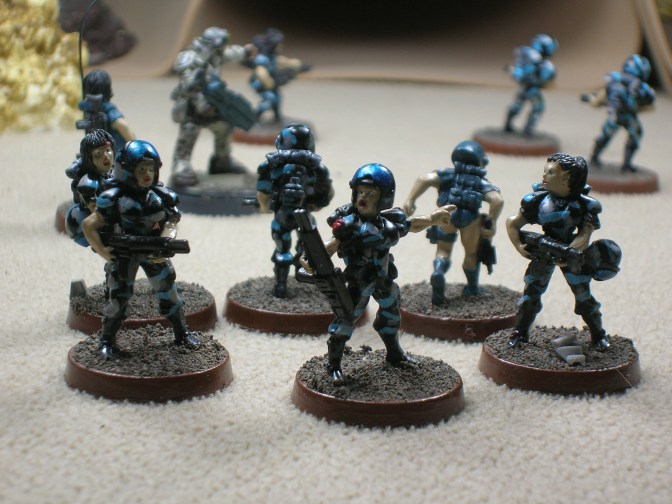 They watched as the plane flew over them toward the North. “Belo, what’s out there where that plane is headed?” asked Katie.

Private Belo checked the scanner and data from positioning satellites as Sergeant Yates looked over her shoulder. She pointed at her screen. “Staff, we’ve got a system of caverns two kilometers to the North.” replied Sergeant Yates.

Lt. Probst handed the binoculars back to Katie. “Well, Staff, looks like we’ve found a place to hunker down.”

“Yes, sir.” replied Katie. “Mount up, people, and let’s get to those caves before everything electrical starts to fry.”

The entrance to the caverns had a large overhang which provided some protection for one of the LTVs. The squad wasted no time in getting as much equipment as possible into the cave.

“Yes, what is it Staff Sergeant?”, the Lieutenant replied.

“Sir, it’s going to be crowded in here. I’d like to send a team to recon further down. They might find a bigger cavern for us and I’d like to know…”

“If there’s another way in that we need to secure? I was wondering that myself, Staff. How large of a team did you have in mind?”

“Just two, sir. Sergeant Yates and one other.” replied Katie.

“Sergeant Yates, a moment of your time, please.” commanded Katie.

Pearl was more than glad to be out of the tight fitting Xeog cockpit and standing on solid ground. She, Azumi, and Momiji quickly retrieved their bags and equipment from the spaceplane’s storage compartment. Pearl noticed Azumi caressing a large caliber sniper rifle.

“A sniper rifle, Azumi?” she asked.

“But we’re going underground, in a cave.” said Pearl.

“So, I’d bring something a little more practical. That’s all.” Pearl remarked.

“You have to understand the culture of the sisterhood…”

“Culture of the sisterhood?” Pearl interrupted. “Xeog culture is the only culture I know of where vanity is enshrined as a virtue.”

“Ladies, we can discuss all of this later.” implored Momiji. “We have less than five minutes to get all of the way into the caverns.” 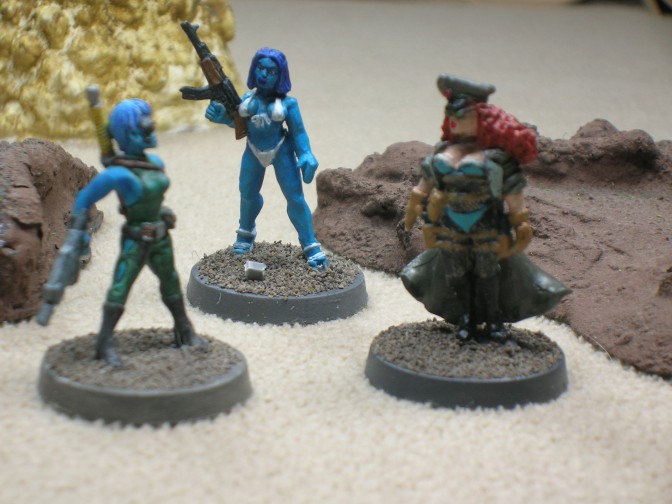 When the plasma wave hit New Hope, the golden brown atmosphere flashed a brilliant yellow. The radiation monitors set at the mouth of the cave surged, but so far the rad unit count within the cave was moving upward very slowly. Katie hoped that Sergeant Yates and Private T’sao would find a suitable chamber before they would have to put on the radiation gear.

“Lieutenant? Staff?” Yate’s words caused both Katie and the Lieutenant to perk up. Lieutenant nodded at Katie.

“We read you loud and clear Sergeant Yates.” Katie responded.

“Staff, we’re down a little over two hundred meters and…” Sergeant Yates paused.

“And what?” asked Katie.

“Well, Staff, there are lights on down here.”

Katie saw the look of astonishment and disbelief on Lieutenant Probst’s face and hoped she didn’t have the same expression. “You and T’sao hold up and stay out of sight. We’re on our way.”