Sisterhood of the Stench – Part 2

Mercy giggled and pointed behind them. Rena looked to see Shandella was lagging behind again. Alainna, who was behind with Shandella, because she was assigned to keep an eye on her, shrugged her shoulders and shook her head.

“Poor Shandella, who knew it would be so hard to keep up with ‘short stubby legs'” said Clara.

“I’m sure it would be different if she had the stamina of a Dwarf to go with her long legs. Still, we can’t do without her, she is our guide into Gorath. Sunset was an hour ago, why don’t you and Mercy go on ahead and find a place to camp. I’ll help Alainna with our witchling friend.” said Rena.

Clara grunted and then she and Mercy quickly disappeared.

After a supper of roasted rabbits and hardtack soaked in drippings, Rena produced a small cask out of her pack. “There’s about a pint for each of us, a little something to share as we take a look at what is ahead of us.”

While Rena filled cups, Alainna asked “We should reach the border of Gorath sometime tomorrow, right?”

“Well, yes, but there is no guarantee  we’ll be able to cross the border tomorrow.” answered Rena.

“Yeah, the border between Gorath and Mirish is a huge mountain range. There may not be a pass directly ahead of us. We could spend weeks or even months looking for a way across.” said Clara.

“Then what do we do?” asked Alainna as Rena handed her a cup of ale.

“Unless Shandella knows of a pass, we should head for Hellsgate Pass.” said Rena.

The Dwarves turned to Shandella who was sniffing her cup of ale trying to decide if she wanted to drink it or not. “I came through the pass you call ‘Hellsgate’, we simply call it the Southern Pass.”

“But that pass is watched. Mirish on this side and the Dark Elves at the other end.” said Mercy.

Shandella shrugged her shoulders, “Watched, yes, but not too hard to sneak through if one is clever.”

“Settlements.” said Clara. “We should follow the border until we come to a village or settlement. In all likelihood, you would build a settlement near a pass.”

“That’s good thinking. If we don’t find a settlement near a pass, we continue towards Hellsgate.” said Rena.

“If we have to find the pass ourselves, why do we need the witchling?” asked Mercy.

“Finding a pass only gets us into Gorath. We need Shandella to lead us to the city of Gorath itself.” replied Rena.

“We should all turn in soon. I’ll take the first watch.” said Rena.

Rena slept soundly after her watch, perhaps too soundly. She felt a weight on her chest as she began to wake and there was a smell, a bad smell tugging her to consciousness. She opened her eyes to discover the weight on her chest was a skunk – a terrified skunk who was nearly nose to nose with Rena. She tried to be calm and hope the little critter would scamper away, She heard a giggle and looked out the corner of her eye. It was Rena’s turn to be terrified. Mercy squatted a short distance away holding a long pointy stick.

The tranquil forest meadow welcoming the first light of morning suddenly erupted in a flurry of Dwarven epithets and oaths. 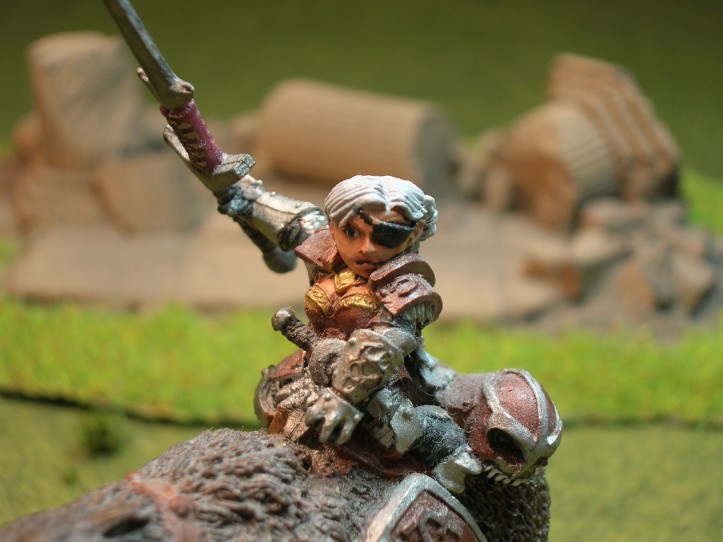 In the first part, I defined the characters of my adventuring party. In this part, I set up the campaign I’ll be playing. A campaign is a series of linked encounters (sometimes called “adventures” in other role playing games) over time to achieve an objective. The objective in this campaign is for the party to explore Gorath and its border with Mirish to determine the level of threat to the kingdom of Mirish.

The campaign in Warrior Heroes – Legends is a map based campaign. This means a map is used to illustrate the progress of the adventurers in achieving their objectives. The party begins in one section of the map and travels through other sections having encounters along the way. In the rules, these sections are called “provinces”, for my purposes, it makes more sense to think of these sections as being “counties” or “districts”. There are a few adjustments I need to make with the map.

First, and the easiest, is to change the period of time linked to the map. In the rules the campaign turn sequence is one month, I’ve shortened the campaign turn sequence to a single day. In this campaign, the party has two fortnights, 28 days, to explore and return to Prince Ulof’s camp. This is also why I’ve made the map sections into districts rather than provinces. I’ve also changed the distances for each section. It takes an entire day to move from the edge of a section to its center and an entire day to move from the center to the edge of the next section.

The second thing that had to be changed was the map itself. In the rules, the campaign map covers Capalan, Altengard, Mirholme and Tereken. In my campaign, I need a map of Mirish and Gorath, the Dark Elf country. I started with the map found in Rally Round the King, it has the most complete map of Talomir to date.

This is where I need to pause and back up a bit. Last time when I introduced the campaign I mentioned that one of the goals of the campaign is to paint fantasy figures languishing in shoe boxes. Some of these figures have been languishing for years. In 2006 at MilleniumCon (where I won the HotT tournament that year), for about $150, I bought a huge box of old out of production Citadel Dark Elves and Dwarfs. Some were primed, most were bare metal, and a few had a hideous paint job. So I added these to an already large collection of unpainted and hideously painted figures. These figures have been sitting around for 11 years, some for about 20 years. It became important for me to start an adventure that will motivate me to paint all of these figures. Therefore, I had to find a place where Dark Elves and Dwarves would collide.

The map gave me the place to set my story. Mirish borders both the land of the Dark Elves and the Dark Dwarves. Nations in Talomir hire mercenaries all the time. What better place to plop a Dwarven expeditionary force than Mirish to keep an eye on the Dark Dwarves. The next step was to divide the map into smaller sections. For this part, I found maps of Talomir with hexes in the files section of the Two Hour Wargames Yahoo group and in the Official Downloads section of the Two Hour Wargames forum. I then just turned the hexes into abstracted squares like the map found in the rules. There are more squares on my map since the scale for movement is days instead of months. Each square represents a smaller area than the squares on the map in the book.

In the next post, I’ll finish up all of the preliminary work. Honestly, it doesn’t take long to set up. It just takes longer to explain how to do it in the length of a typical post.

Figures coming off of the painting table this week include another unit of Greek hoplites, two Greek hoplite casualty markers, 5 battle nuns, a skeletal drummer, a tiefling or hellspawn, and the iconic Copplestone female pulp adventurer. for a total of 18 figures.

The battle nuns from Reaper were a delight to paint. All of the figures done this week were a delight, but these little nuns are a hoot. Waist up, they are wearing a nun’s habit that has a surprisingly low cut neckline and waist down, they’re wearing thigh high boots and a thong! Only in fantasy would you have a nun covering her head and shoulders in modesty while showing off cleavage and other “assets.”  I’ve decided that they belong to the Order of Saint Derriere, patron saint of bare bottoms. 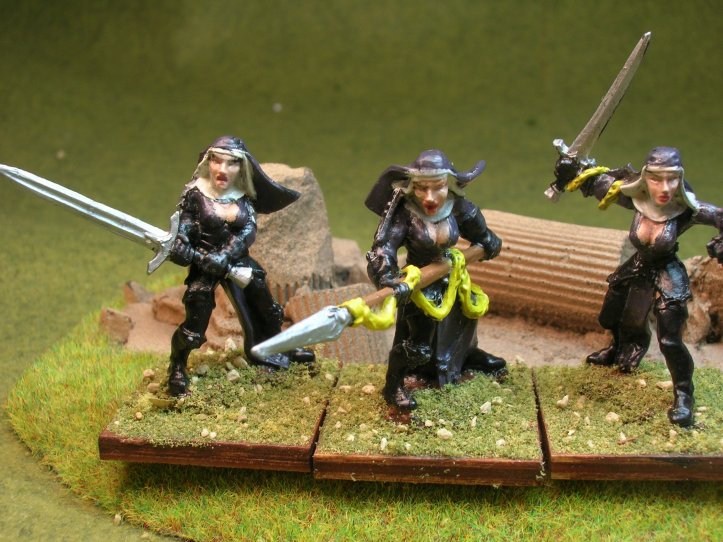 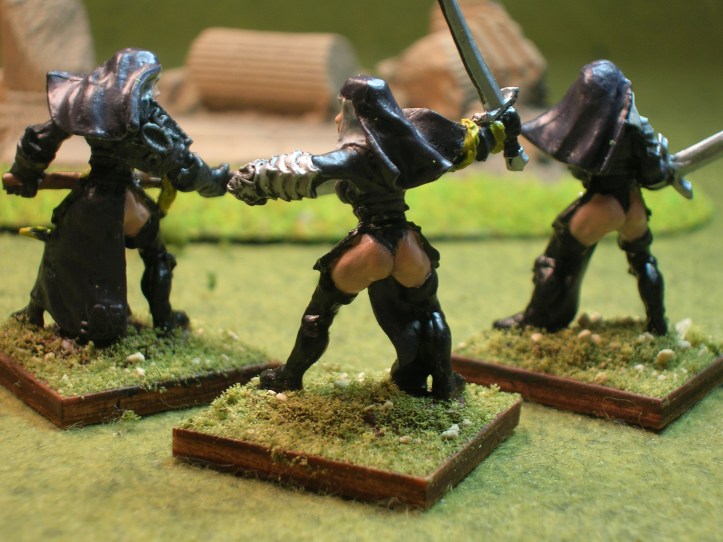 The undead this week are represented by a skeleton drummer. This figure painted up quickly and is nicely detailed.

Another thong wearing beauty, but you would expect a Tiefling to be a bit rebellious and risqué. 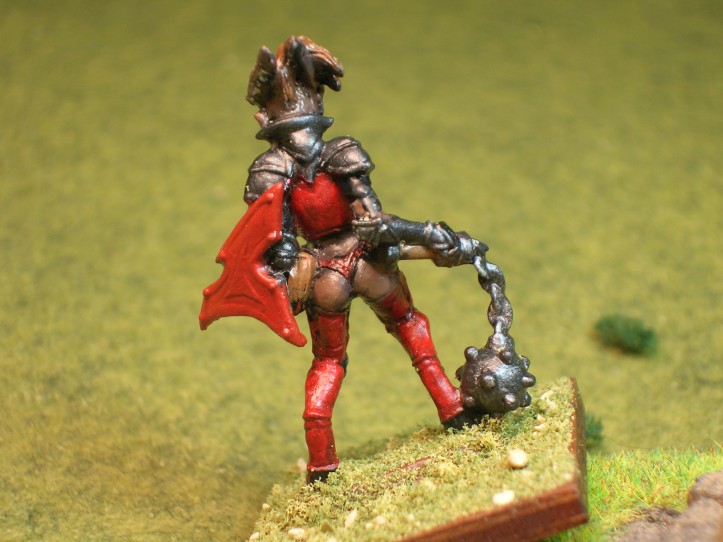 And finally, a female adventurer from Copplestone Castings. This is an iconic figure, nearly every Victorian and Pulp Fiction player I know owns this figure. The lines are simple and the figure paints up very nice.