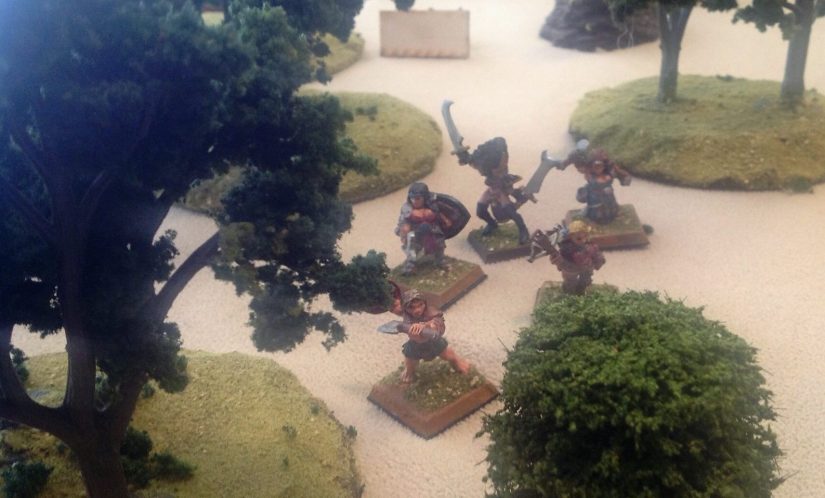 Her eyes and nose no longer burned, though her eyes were bleary. “Thank the gods my mouth was closed,” Rena thought. She hated to imagine how much her mouth and throat would have burned from the spray.

“Are you through soaking in the creek?” asked Clara, “We really should be going.”

“No, you smell worse – you smell like a wet skunk.”

“Why did Mercy do that?”

“I’m partly to blame,” said Clara. “I told her that we needed to get you three acclimated to the wild. I didn’t know Mercy would go this far.”

“Yes, you three smelled of perfume and soap. Out here things are different. You are used to marching to meet your enemy on a battlefield where you know the enemy is waiting for you. In that kind of fighting, it doesn’t matter what you smell like. Out here, we never quite know where the enemy is. Our senses are drawn to what is out of place in nature.”

“And soap is out of place?”

“Yes, war is different here, here the enemy are bands of orcs or goblins or some other vile creature. The smell of soap would rouse their curiosity.”

“And the smell of a skunk wouldn’t?” asked Rena.

Clara laughed, “not unless they were starving.”

The dwarves and the dark elf broke camp before noon and made their way northwest toward the border and Hellsgate Pass. Clara wisely placed Mercy on point several yards ahead of the group. They journeyed throughout the afternoon through rolling hills and light woods. They found no settlements, no roads – only animal trails.

Late in the afternoon, they caught up to Mercy, she signaled them to halt. “Gnolls,” said Mercy, “they’re up on that hill. One as a lookout on the crest and the others camped on the reverse slope.”

“Do we go around?” asked Alainna.

“We could, but the terrain is more difficult on either side, we’d lose the better part of a day.” said Mercy.

“What then, we fight? I need a sword.” said Shandella.

“Maybe we can get by without fighting,” said Clara, “we could slip between the sentry and the camp and with luck they won’t spot us.”

Rena looked into the eyes of her companions. There was no fear in them, they were waiting for her decision. “All right, we’ll slip through. Mercy, take the lead and everyone be quiet.” Rena opened her pack and handed a sword to Shandella.

“What’s this, a short sword?” grumbled Shandella. She looked at the dwarves and rolled her eyes. “It figures.”

Mercy passed behind the sentry with no problems. Next came Clara and Rena. The sentry sniffed the air. Smelling skunk, he gave a disgusted snort. Bringing up the rear was Alainna and Shandella. Just as it looked as though they would make it, Shandella stumbled alerting the sentry.

The startled sentry is quickly silenced by a bolt from Clara’s crossbow, but not before he barks a gurgled warning.

The remaining seven gnolls turned from their fire to answer the sentry’s cry. Mercy charged the closest gnoll. Clara rushed a second shot which went wide. A swift gnoll rushed Shandella. Rena charged into the camp engaging a large warrior. She was expecting to be swarmed by the rest of the gnolls to give the others a chance, but the quick thinking runesmith, Alainna, cast a spell stunning the remaining gnolls.

Three of the stunned gnolls fell to the ground, but the fourth, a shaman, fled.

Rena did not take long to inflict a mortal wound on the gnoll she faced. Shandella also dispatched a gnoll. Mercy was locked in combat. A quick glance told Rena that Mercy would have to hold her own, the three stunned gnolls were recovering their senses. Rena and Shandella each charged a remaining gnoll. Clara fired at the third, but he was able to deflect the bolt with his shield.

Having expended all of her magical energy on the stun spell, a tired Alainna rushed to support Mercy, Just as she reached Mercy, Mercy gave the gnoll a fatal blow. The gnolls may have still been affected by the stun spell, for it didn’t take much for Rena and Shandella to dispatch them. That left one gnoll. The party paused to give the creature a chance to flee. He charged, instead.

The last gnoll did not last long fighting two dwarfs and a dark elf witchling. In a dramatic fashion, after receiving the killing blow, the gnoll tumbled down the hill.

Though exhausted, the party moved on to put distance between themselves and the battle. Rena and the others would not rest until well after sunset.

This scenario was a modified Raid Encounter. The PEF representing the enemy resolved into eight gnolls. Instead of placing the gnolls into a building, I decided to place them around a campfire with one gnoll on watch. This gave me the premise for using a Physical Challenge for each of the adventurers to pass. If any one of the party failed, it would trigger an In Sight Test.

Since the dwarves were out numbered, I gambled on Alainna casting a dazzle spell with all of her magic power dice. It payed off in that the dazzled gnolls that didn’t flee were incapacitated for an entire turn.

The female explorer is from the Female Archaeologists pack of figures from Copplestone Casting’s Back of Beyond range. She’s kind of special because she was sculpted wearing a large brimmed hat. The type of hat seen in photos of Gertrude Bell. Many gamers paint this figure up to represent the famous British explorer and part-time spy. Here’s my rendition: 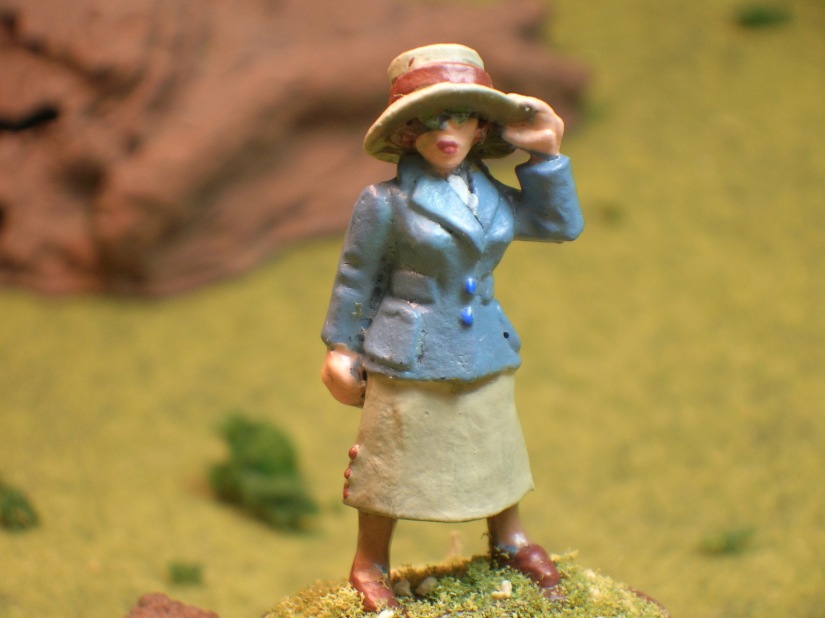 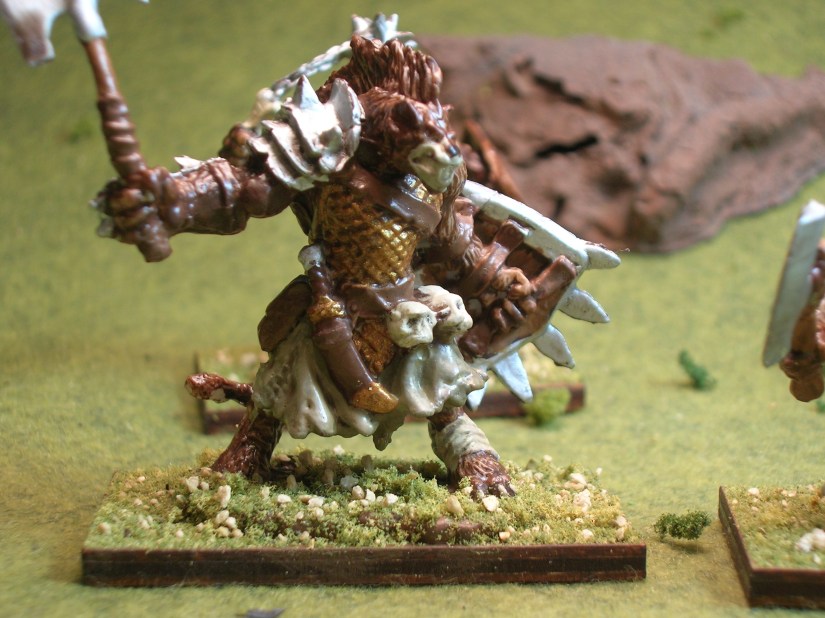 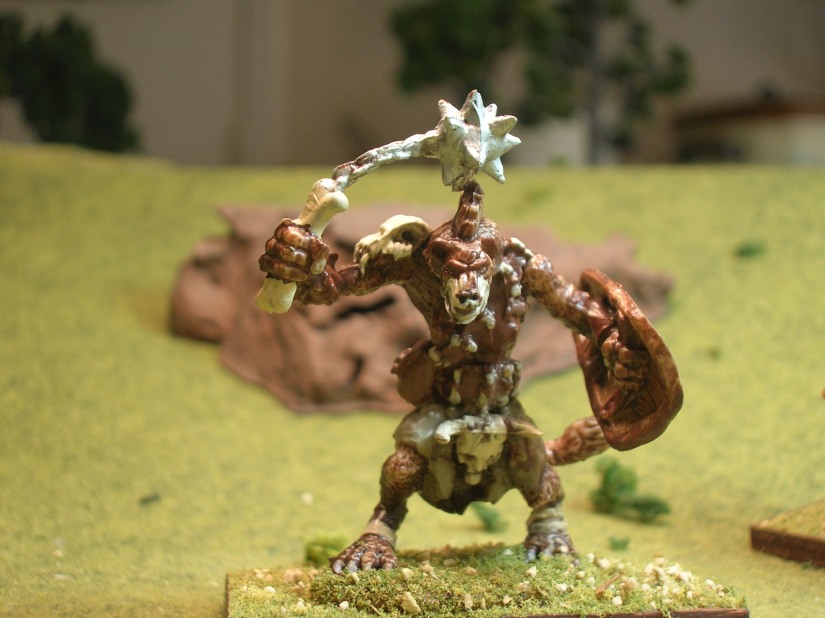 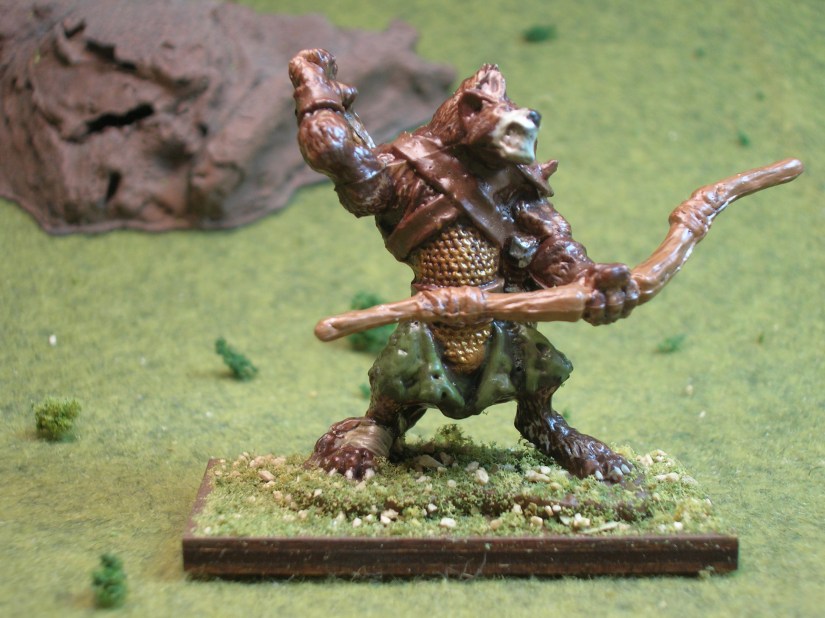 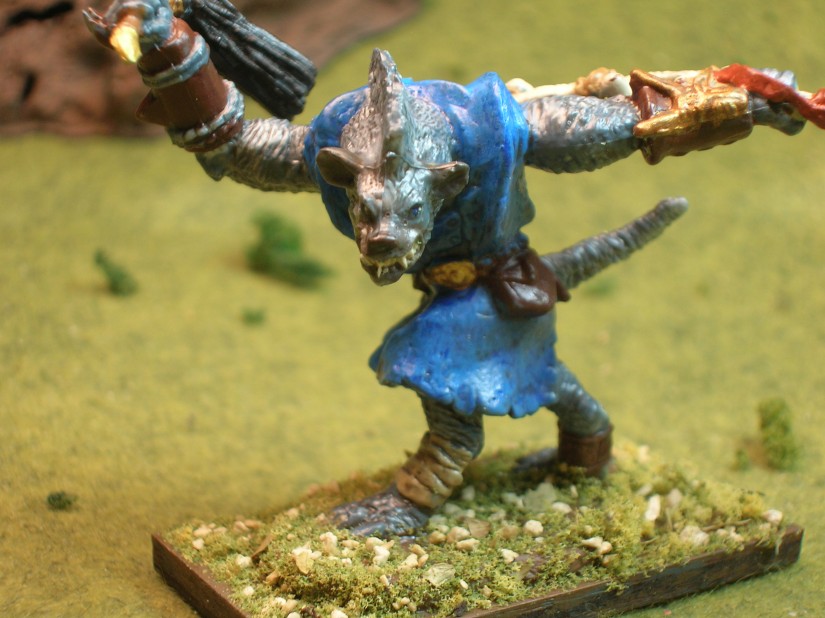