I’ve finished the last of the French infantry for my “Bridge at Hoya” Seven Years War game project.  I still have a ways to go – 1 Brunswick Battalion & a company of Jagers for the infantry, the cavalry for both sides, command stands for the generals, artillery limbers, supply wagon & the terrain.  But I’m getting there.

If you haven’t seen my earlier posts, I’ve chosen to game a small engagement in the Seven Years War – the engagement at Hoya in February 1758.  I’m not studied in the Seven Years War, I’ve read a little about the conflict and have watched Kubrick’s “Barry Lyndon” several times (including it’s initial release in 1975).  So, I’m kind of a newbie when it comes to this period in history.  To set the stage for what happened at Hoya, here’s what I understand.  In the fall of 1757, King George II appointed Duke Ferdinand of Brunswick as commander of the Anglo-alliance army to resume hostilities against the French who were occupying Hanover.  As Ferdinand gathered his forces and began his winter offensive, the French began consolidating their defenses which included destroying bridges and boats to delay the allied army.

On February 23rd, the Duke of Brunswick sent a small corps of troops under the command of his nephew, the Hereditary Prince of Brunswick to take a bridge at Hoya and to dispossess the French from the city.  Though the French were outnumbered, they were well entrenched and Hoya was defended by one of the best units in the French army, the Gardes Lorraines. 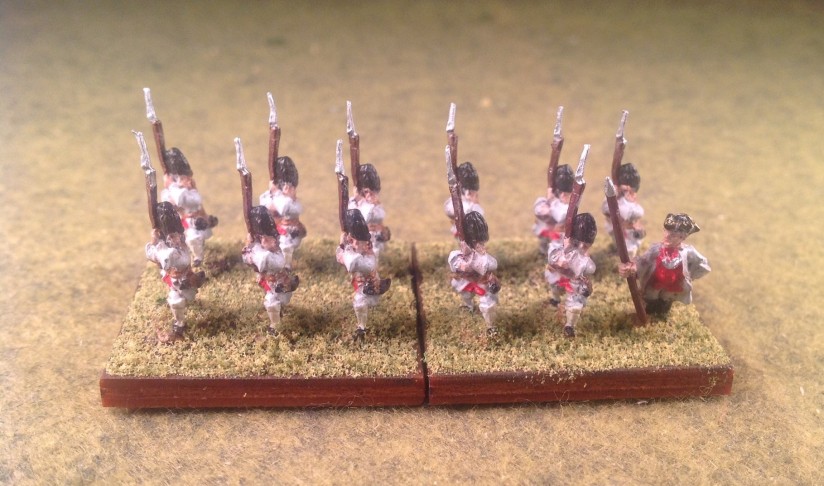 In addition to the Gardes Lorraines, the trenches were manned by a “picquet” detachment from the Bretagne Infantry Regiment.  The detachment consisted of two companies of grenadiers and 100 fusiliers.

Today we use the English word “picket” in place of “picquet” and it most commonly conjures up the image of sentries.  At this time, however, a picquet was a detachment of troops on the very edge of the front.  They often served as an outpost to give warning of an enemy’s approach.  If you are thinking “picket fence” you are not far off in how the term originated.  During the 17th century when infantry units were a mixture of pikes and muskets. the musketeers kept watch while the pike were held in reserve – this formation resembled a picket from a picket fence.

Being in the forward trenches, the Bretagne detachment was the first to contact the advancing allies.  They did not retreat, but instead fought until they were overwhelmed.  This small battle was a bloody affair for the French, the Gardes Lorraines were so decimated that the regiment did not see combat for the remainder of the war.

I really do not care for the propaganda generalization that the French are quick to surrender.  The French have always fought bravely, and honestly, our country would not exist without aid from the French.

The 10mm figures are from Pendraken Miniatures and a great company to deal with.  The smaller size figures are slightly easier to paint in that you can get a lot of them done in a shorter amount of time.

For rules, I’m going to start first with Muskets and Shakos a Two Hour Wargames title that you can find at Rebel Minis.   The reason for this choice is that they are written for the battalion level of play – kind of in-between a skirmish game and a division or corps level game. 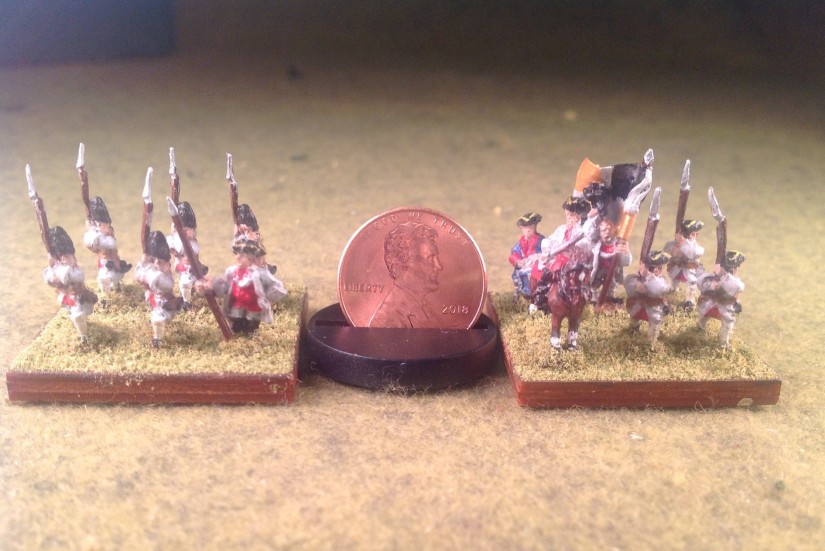 The completion of these figures adds 24 figures toward my painting goal for the year.  I know you’re probably getting tired of hearing this, but golly gee moving closer to that stupid goal feels good.

Your comments are always welcome and needed!  If I didn’t have this blog to do, the Floozy would become a total BLINK and idolize Jennie, Lisa, Rose & Jisoo!