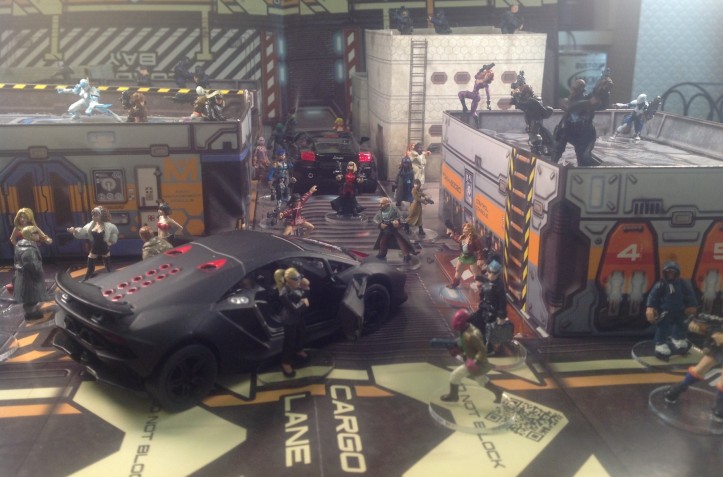 “But seeing her there, that drunken kid’s hand in hers, that hand she couldn’t even feel, I knew, once and for all, that no human motive is ever entirely pure.” – William Gibson, “The Winter Market”

Yin swam through a fog of pain as she surfaced to consciousness with a hangover induced headache.  The source of the pain was the incessant ringing of her phone.  She would normally look at the display to see who was calling, this time she just wanted the damn thing to shut up.  “Hello,” she mumbled through numb lips with a thick tongue – her throat, dry from the evening’s booze.

“Yinnie!  You up for a job tonight?  I need you,” said a much too pleasant voice.

“Margo?  That you?” Yin asked as she sat up.  Yin shared a one room apartment with three others.  She was careful to swing her legs over so she wouldn’t step on whoever was sleeping on the floor next to the couch. 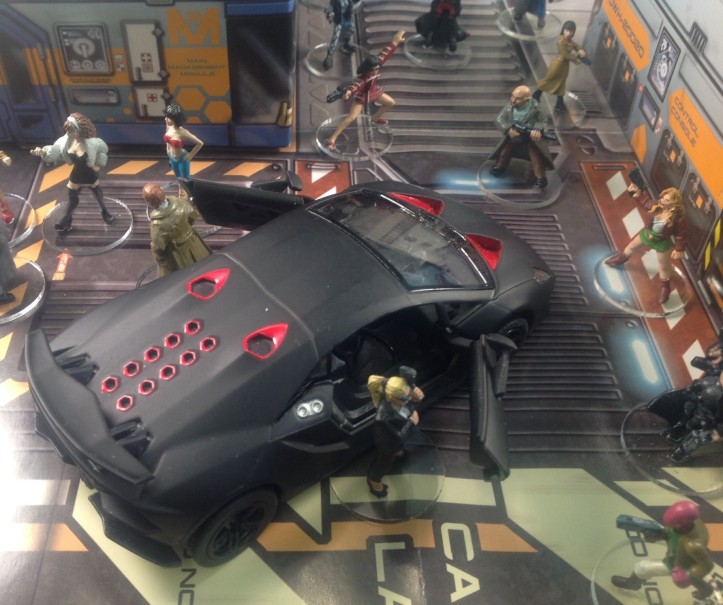 “I’m doing a run tonight and I need someone to watch over me while I dive.”

“I thought you worked on a team of mercs, can’t they protect you?”

“I do, but we’re spread thin for this one and the team doesn’t have anyone to watch my back.  That’s why I need you” said Margo. 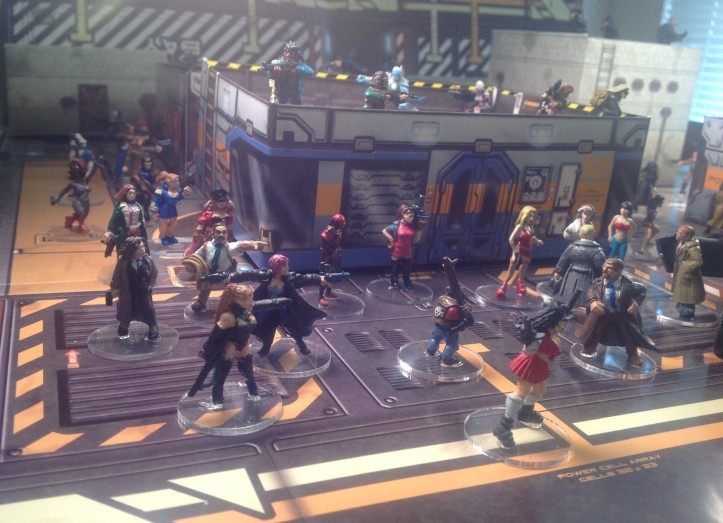 “Margo, your boss man, Rolfe, doesn’t like me, remember?  I don’t think he’d want me to tag along.”

“Friends?  I thought that ended years ago when you picked up your cyberdeck and went your way.  It’s been what, at least two years since you’ve even bothered to say hello?”

Margo replied “That’s not fair, Yinnie.  Yeah, I picked up a deck and learned to run the net – and got myself off the streets.  But I’m not the one who picked up a gun and disappeared.” 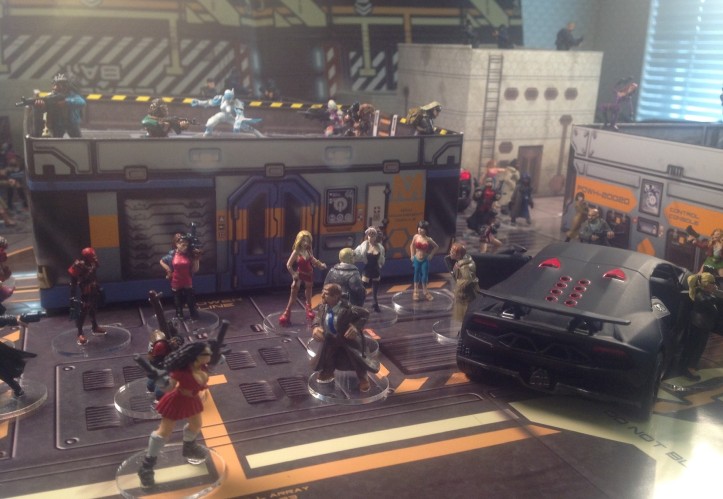 Margo laughed, “That’s fair enough.  Meet me at the Green on Sunset at five this afternoon.”

“At five this afternoon?  That’s early for a night run.”

“Well, knowing how you live – we’re going to have to get you cleaned up.  Takes a while to wash the smell of the streets off.”

There was concern in Margo’s voice.  They exchanged one or two more pleasantries and Margo hung up.  She ran her hands through her hair and groaned as her head throbbed.  She tried to lick her lips, but her mouth was dry.  She thought it was time for the hair of the dog.  She carefully stepped over whoever was on the floor and realized he wasn’t one of her roommates.  Less than a foot away, a girl lay on the floor.  It had to be Jackson, she thought.  Jackson was always inviting people over to crash in the apartment.  She made her way to the bathroom – a bathroom without a door, just a sink and toilet.  She unzipped her shorts, but then the smell of a toilet that hadn’t been flushed in days caused her to gag and then her stomach convulsed.  When her stomach settled down to dry heaves, she began to think about Margo’s job and hoped it might bring a change of scenery. 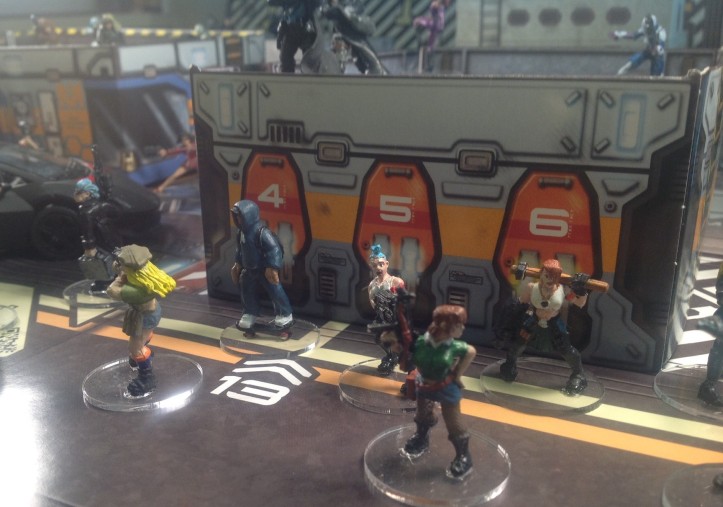 The coffee at the Green was decent.  The Green took pride in the consistency of it’s brew and even more pride in the prices it charged.  They shopped for some gear Yin would need for the night’s run and then returned to Margo’s apartment.  Margo’s apartment was in a high-rise on a hill.  Decent places were always high above the streets, it had always been that way since time immemorial.  While Yin showered, Margo laid out the purchases on the bed – the most important being a Monocrys bodysuit.  Monocrys is slightly better than the beloved ancient Kevlar at stopping projectiles, but it has two advantages, one is that it is lighter and provides complete freedom of movement and the second is its ability to hide the body signature from infrared and other heat detection sensors.

Still patting herself dry, Yin entered the bedroom, she dropped the towel and Margo gave a little gasp.  Margo had seen glimpses of tattoos, but now she realized it was only one tattoo.  It was a black dragon.  Its tail started above Yin’s left knee and twined up her thigh, between her legs and up her backside before continuing to twist around Yin’s torso, a paw cupped Yin’s left breast before making a final twist up the back of Yin’s neck with the creature’s tongue licking Yin’s right ear.  Yin smiled, Margo knew she had heard her, and the silence was making matters awkward – she had to say something.  “That’s, that’s some tattoo, I’ve never seen one like it.”

“It took quite a few months to have it done” Yin said with pride.

Yin laughed, “Only when I was conscious, he did most of the work when I was out.”

“You were unconscious while he was working on you?  Weren’t you afraid of being taken advantage of?”

“How do you think I paid for it?  It was kind of like working in a blue light house, only I wasn’t wired to orgasm simultaneously with the Johns” Yin replied.  She noticed a visible sadness creep across Margo’s face.

“I – I had a crush on you in school.”  Margo looked down, she had managed to make herself feel even more awkward.  “But you discovered boys.” 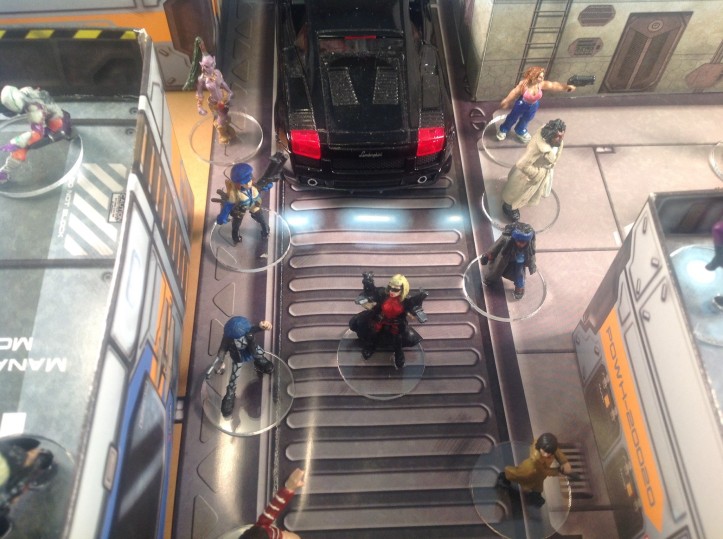 “I’ve broadened my horizons since then,” replied Yin as she slipped on a new pair of panties.  “Now, I take love when I want regardless of gender, race or sometimes even species.”

“You mean you could love a woman?” asked Margo.

“Before you get started,” said Yin, “your notion of ‘love’ may not be the same as mine.  ‘Love’ is an illusion – a word we use to disguise the need to scratch a primordial itch.”

“Really?  That sounds callous and cold.  Is there no room for romance?” Margo asked.

Yin snorted.  “Romance is a mind game played to enhance the illusion.  But business first, we can scratch itches later.  Tell me more about tonight’s job.  Why do you have to go on site?  Most net runners I’ve ever worked with were miles away in a comfy chair wearing fluffy pajamas.” 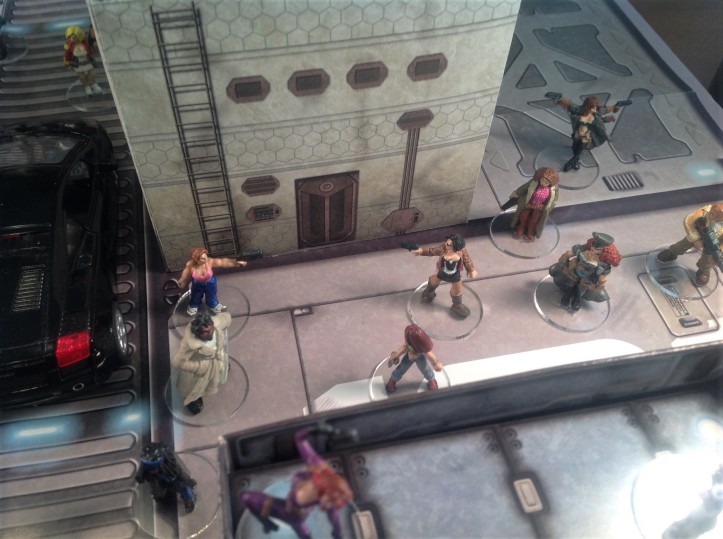 “That’s true for most jobs,” said Margo.  “Sometimes the target is on a system not connected to the nets – in that case, it requires physical access.  While technically at peace, the corporations engage in series of clandestine operations against one another.  When they cannot use their corporate security forces, they hire mercenaries, us.  We’ve been hired to retrieve the contents of a drive on an isolated server.”

“Humph, they don’t just hire you mercs, they make use of the gangs and street operatives as well” said Yin.

“For low level tasks, sure” replied Margo.  “They don’t use gangs to infiltrate corporate arcologies.”

“Arcology?” blinked Yin.  “We’re raiding an arcology?”  Arcologies were fortified islands afloat in the sprawl’s sea of slums – owned by mega-corporations, arcologies were for the most part self-contained, self-supported ecosystems of corporate assets. 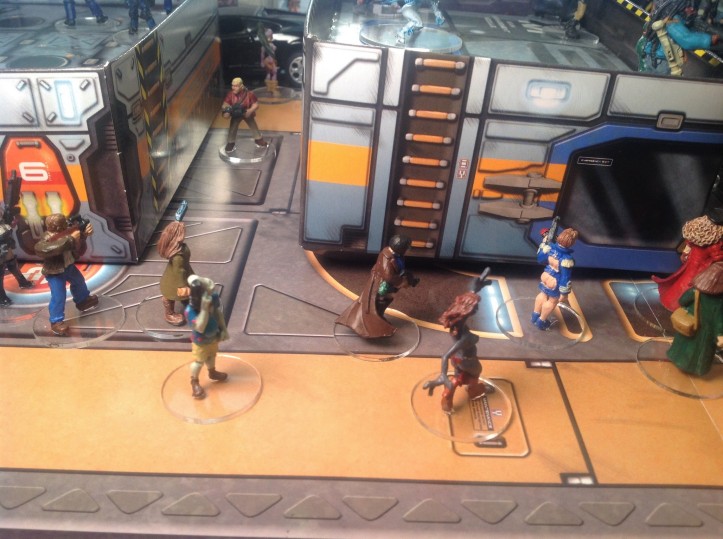 “Yeah, an R and D called Ourodyne.  They’re under Huitai’s umbrella and located in the Huitai arcology,” Margo said in a nonchalant manner as if waltzing into a corporate bastion was as easy as entering a dive.  Yin had other questions as to how they were going to get in and more importantly, how they were going to get out, but she knew Margo wouldn’t know the answers.  Those details were up to other members of the team.  That was the way it was with mercs, each member only knew his or her part of the mission.  Mercs had a trust for one another that was rare on the streets.  The small talk tapered off as the two finished dressing for the mission.

Welcome to Star Punk Dreams, a 5150 No Limits game campaign.  Follow along as I use this interesting set of rules to propel my star character from the slums of a mega-city sprawl to a start on another planet.  I hope an engaging story evolves with each encounter.  That is the only reason I play a game, to tell a story.  I don’t really play to win, so I’ve never maxed out an army.  Even in the early days of Warhammer when other players were building ultra-character Chaos armies, I played Dwarves and Dark Elves (when I felt sadistic).

The above story popped into my mind as I was defining or creating my star character.  At first she was going to be the hacker – Margo, but I really want a gritty Cyberpunk vibe and that led me to a self-assured loser – Yin.  Yin is a loner who happens to be good with a gun.  Up to this point, her life has been petty crime after petty crime with booze and debauchery in between.  She turned out this way when I was rolling for the first attribute for my Star and got the “Cruel” attribute. 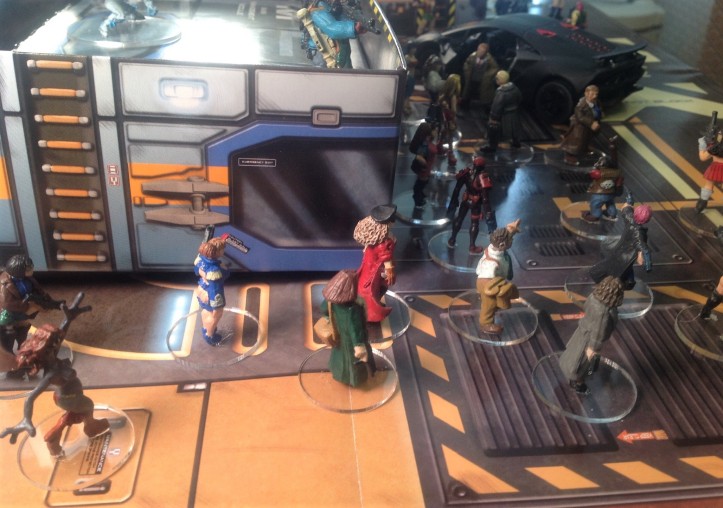 When coming up with a name for my Star, I gave thought to what the far future would be like.  In the Cyberpunk genre, the future is influenced by Japanese culture – I chose the “Firefly” route and decided the future would definitely be influenced by Asian culture, but more so by China than Japan.  I chose the name “Yin” after the symbolic Yin and Yang.  Yin is not only feminine, Yin is also dark.  I myself, was born in the year of a black dragon.  A Chinese word for dragon is “loong”, thus my character’s name – Loong Yin.

So here are the particulars:

The campaign’s first encounter is a Job Offer.  The employer’s profession is Criminal Element and the job is an Escort.  I’ve had characters work for Dealers and mob bosses in the past, but I wanted something a little different this time.  Enter Margo Fineberg, a Net-Runner by profession and Yin’s high school lesbian friend.  Not only have I made Margo the employer – with the Escort job, she is also a member of Yin’s group, and – and she brings some sexual tension into the story.  Here’s her stats:

The Escort encounter is a bit unusual in that it is wrapped inside of a Raid encounter.  Yin’s job is to escort and protect Margo as she participates in a Raid with other mercenaries.  We’ll meet the rest of the mercenaries and carry out the raid in the next installment. 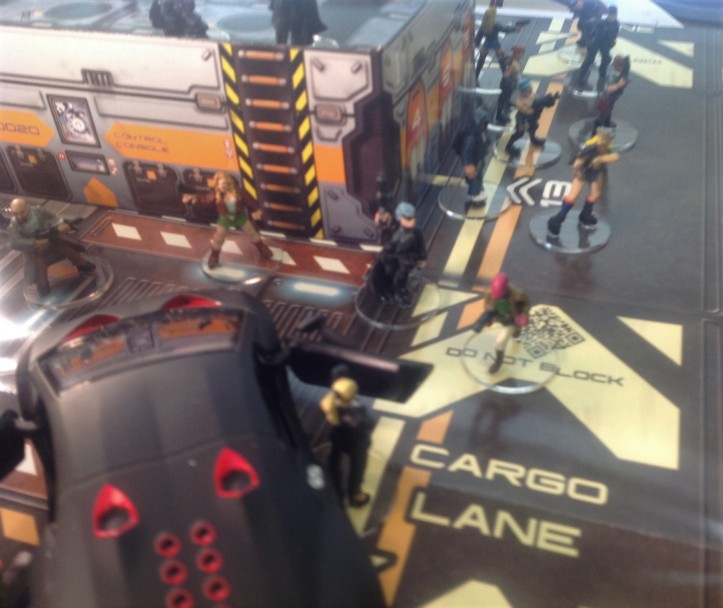 If you don’t own a copy of 5150 No Limits, consider picking one up at the Two Hour Wargames store.  You can also play a similar campaign using 5150 Urban Renewal, 5150 Fringe Space or 5150 Back Alleys Bright Lights.

The photos in this post are of a street scene using miniatures from several companies.  The mat and building are from the Operation Icestorm box set by Corvus Belli, but can be purchased separate of the box set.

The language and imagery in this story is a bit more harsh and dark than what I usually write.  For this campaign, I’m trying to capture the dystopic atmosphere found in the Cyberpunk genre, particularly William Gibson’s early works.  Why did I choose to write in this style?  Maybe it’s the times I’m living in. 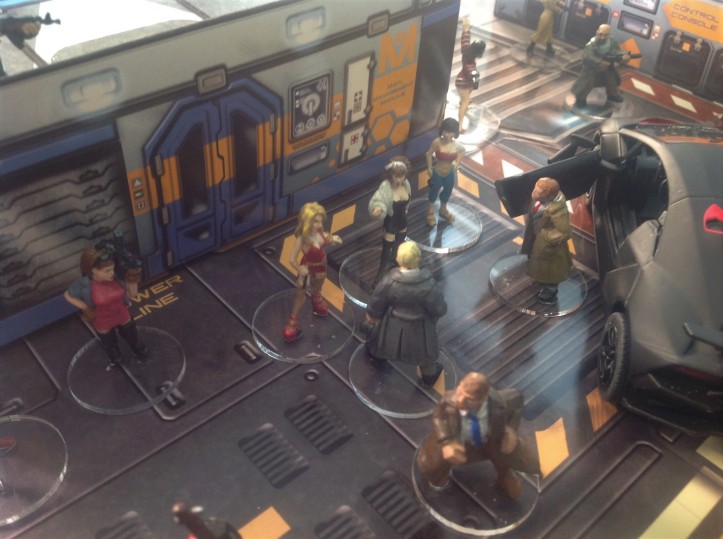