“She didn’t see that first bullet, but it must have hit a wire or something, coming through, because the lights came on.  She did see the second one, or anyway the hole it blew in the leather-grain plastic.  Something inside her stopped, learning this about bullets: that one second there isn’t any hole, the next second there is.” – William Gibson, Virtual Light

It was the quiet one, Emily Clarke, who reacted first.  Grabbing a fire extinguisher off the wall she began spraying as the elevator doors began opening.  Yin drew her auto pistol and fired short bursts into the elevator car.  She had learned that short bursts of three to four rounds did a better job of suppressing targets than long sustained bursts of fire.  She was aided by the fact she was firing rubber bullets which ricocheted like crazy inside of the elevator.

Blinded and receiving a hail of gun fire, one of the security guards had the presence of mind to push a button for a lower floor.  The elevator doors closed, and the car sped down.  The team now turned to Rolfe in stunned silence. 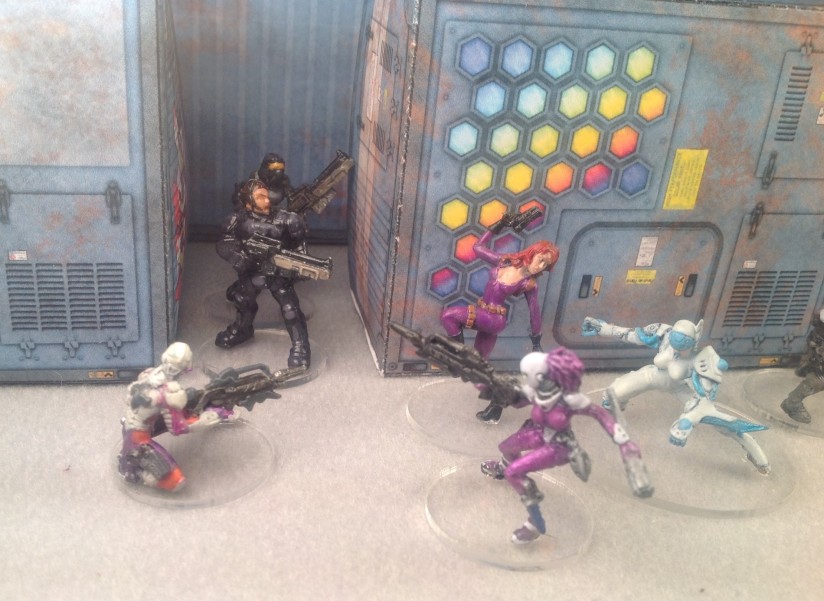 “Stairwell,” Rolfe growled.  “Mao and Clarke lead the way.”  The two took off at a trot.  Rolfe watched as Yin took a cassette of caseless ammunition and slapped it into her pistol.  “Rubber bullets?” he asked.

“I was told this was a non-lethal mission” replied Yin.

“What do you do if it turns lethal?” Rolfe asked.

Yin smiled and with her free hand, she flexed her palm and blades shot out from under her fingernails.  “In that case, it gets close and personal.”

Inside of the stairwell, Yin peeked over the rail, it was a long way down.  They had moved down two floors when they received the dreaded message from the communications officer.  “Red Fist, hostiles are on to us and retaking control of systems, be advised we are withdrawing assets.”

“Withdrawing assets?  What does that mean?” asked Margo.

Rolfe replied, “It means the off-site net runner is jacking out and that our ride is leaving the parking garage as Huitai locks down the building.”

“What do we do?  Once we get down to the ground there’ll be an army waiting for us” said Margo.

“There is a way out,” said Janie Parsec.  “On the second floor there’s a cafeteria with an out door patio, from there we can drop to the street.  They won’t be expecting it, so there shouldn’t be many guards on that floor.”

“Sounds like a plan” said Rolfe, “Comms, stay with us as long as you can.  Let’s move out, Mao, take point.”

Descending the stairs as quickly as possible while maintaining a high level of caution created a great deal of tension.  The tension gave Yin a bizarre euphoria.  At the bottom of each flight of stairs, she expected a doorway somewhere in the stairwell to slam open producing a horde of guards eager to exchange lead.  But it never happened.

The stairwell door on the second floor was pissing off Yin.  It was an enigma robbing her euphoric high and replacing it with anxiety.  Without system support, they had no way of knowing what or who was on the other side of the door, the door was a classic fatal funnel.  Their best option was to rush through the door and overwhelm whatever was on the other side.  They lined up like ducklings, Mao first, followed by Clarke, Rolfe, Yin, Margo and Janie Parsec bringing up the rear.  Rolfe held up his left hand with his fingers extended.  He started a silent countdown, five, four, three, Margo took a deep breath, two, Yin grinned, one – go!

Three guards were on the other side, amateurs, one shouted “Halt!”  Mao and Clark opened fire.  Two guards went down, the other ran away.  Unlike the twentieth floor’s cubicle farm matrix, the second floor was a maze of rooms and hallways.  Yin could hear running and shouting as security guards converged on their location.  They came to a T-junction, Janie Parsec pointed left.  The hallway ended in an open area, a small lounge in front of the cafeteria.  It was also where security guards caught up to them.

This time there were no shouts of “halt” or “hands up,” the guards just opened fire.  Yin vaguely remembered some general saying the sound of bullets passing through the air was “charming,” if Yin hadn’t been high, she might have found the sound terrifying, instead it was just a pissing annoyance.  If the cafeteria hadn’t been so close, the team would have turned and fought it out with the guards, they were running pell-mell for the cafeteria doors.

Mao caught a bullet in her calf and went down.  The others kept running.  That was the thing about mercs, mercenaries got paid for completing missions, not saving their comrades.  Yin dug her heels in and turned.  There were half a dozen guards, shoulder to shoulder, advancing in the hallway.  She fired a couple of short bursts, two went down and one backed away.  She ran to Charlene Mao’s side and extended her hand.

“What are you doing?” asked Charlene.

“Getting you out of here,” Yin replied, “besides, you’re too flat-chested to go ‘tits up’.”

Charlene laughed, “Bitch!”  Yin helped her to her feet and supported her as she limped toward the cafeteria.  The guards began firing again.

“This is too slow” said Yin as she bent low and hoisted Charlene into a fireman’s carry.

Just as they reached the cafeteria door, Charlene said, “Don’t look back, grenade” and tossed a flash banger.

Yin’s ears were still ringing when she caught up to the others on the cafeteria’s patio, just as Janie and Margo dropped over the side.  “What the hell?” asked Rolfe.

“Med-kit need a tourniquet,” said Yin.  Emily Clarke opened her pack and tossed a silver metallic plastic pouch to Yin.  “Go on, we’ll catch up” said Yin.  Rolfe and Clark disappeared over the side.

“You know they’ll leave you behind” said Charlene.

“No, they’re leaving us behind,” said Yin.  “What is it with you mercs, no loyalty to one another?”  Yin tore open the plastic pouch and pulled out a red sticky plastic strip.

“Well, I sure as hell am no merc.” Yin said wrapping the red strip below Charlene’s knee.  She gave the strip a twist and then pulled.  The strip faintly glowed as it constricted.  “Payback is a bitch they say and there ain’t no bitch as pissed as I’m going to be if they bail on us.  Now over the side, we’ll have a better chance on the street.” 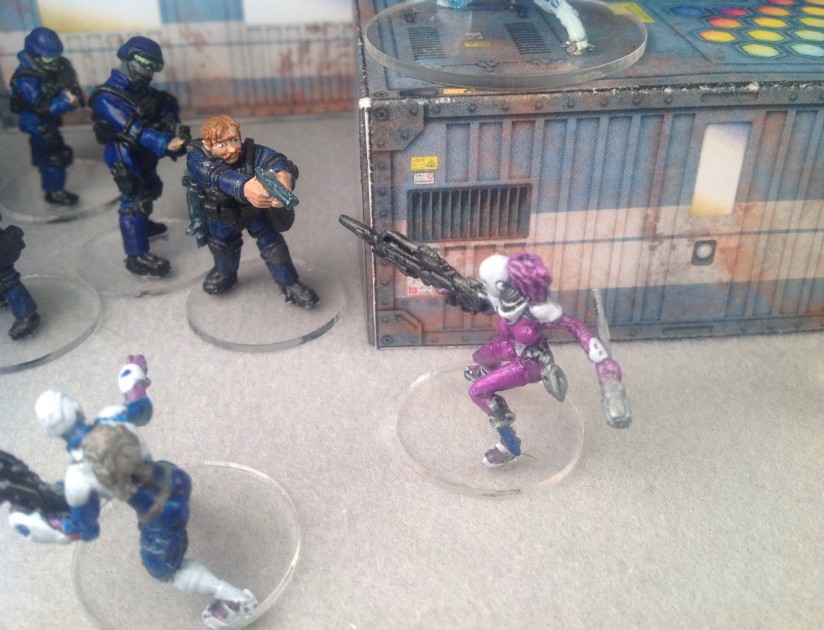 As Yin straightened up after hitting the ground, she saw the service van a block away.  Rolfe looked at them, stepped in the van, slapped the roof and shut the door as the van sped away.  Yin could have sworn she saw the bastard wave at her or give her the finger.  The sound of sirens filled the air, soon there would be cops and security forces everywhere.  She looked down the street and saw a subway entrance.  She hoisted Charlene on her shoulders and broke into a trot toward the entrance.

“What are you doing?” Charlene asked.  “It’s late, the trains won’t be running for another couple of hours.”

“Good, means we won’t get run over while we’re in the tunnels” said Yin.  The trains weren’t running as Charlene said, but Yin thanked her lucky stars that the escalators still were, the stims were wearing off, Yin was beginning to feel tired.  On the platform, she sat Charlene down on a bench.  “Hey, you got any stims?  I’m bushed.”  Charlene didn’t answer, she was still breathing, breathing a good rhythm, but she’d passed out.

A homeless man was digging through a garbage bin.  The homeless in nice parts of the city were like roaches, you never saw them when the lights were on.  He pretended like Yin and Charlene weren’t there, or maybe he was pretending he wasn’t there.  “Hey, pops, I got twenty creds that says you know a place to crash in the tunnels” said Yin.  He looked up from the trash bin and blinked.  “Come on, don’t be afraid.  Twenty creds, for real – twenty-five if the place is dry.”  He smiled and held out a grimy hand. 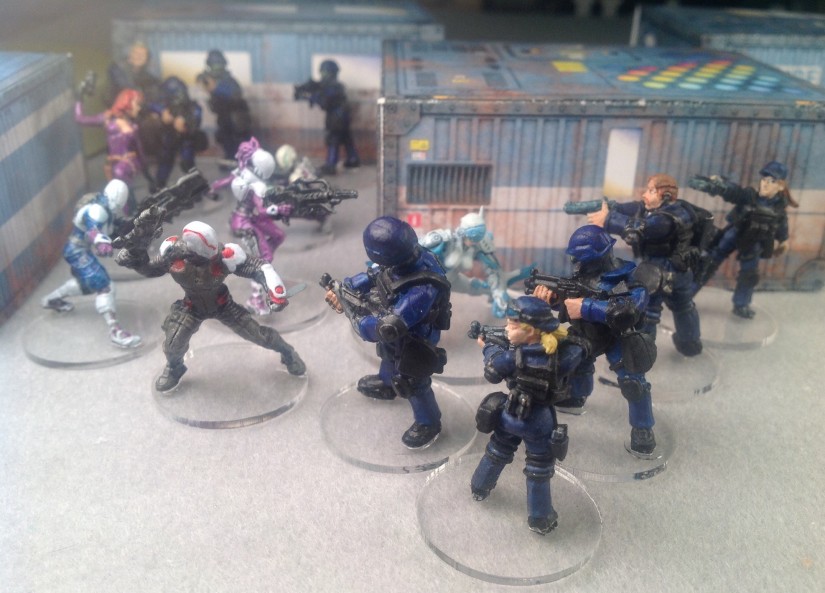 Well, the raid went well, but Yin may or may not have failed the Escort Encounter.  She accompanied Margo to the vault and got her safely out of the building, however, she did not escort Margo safely back to Margo’s apartment.  The objective of the Escort Encounter is: “To be successful the NPCs you are escorting must escape the Encounter unharmed.”  Margo might be angry at Yin for abandoning her safety to help Charlene.  So, to determine if the Encounter is successful – the next time Yin meets Margo, she’s going to Sweet Talk Margo into forgiving her and if Margo’s anger is mollified, then maybe Yin can call it a success and get paid.  This is done through the Interaction mechanism the next time Yin meets Margo.

The Challenge is probably the least used and understood mechanism, especially by those who played a lot of mass combat wargames such as Warhammer 40K, Flames of War, etc.  But if you’ve played a fair amount of role playing games such as D&D, Pathfinder, GURPS, etc., then you’ll recognize the challenge as the skill check.  Challenges can really help flesh out your story. 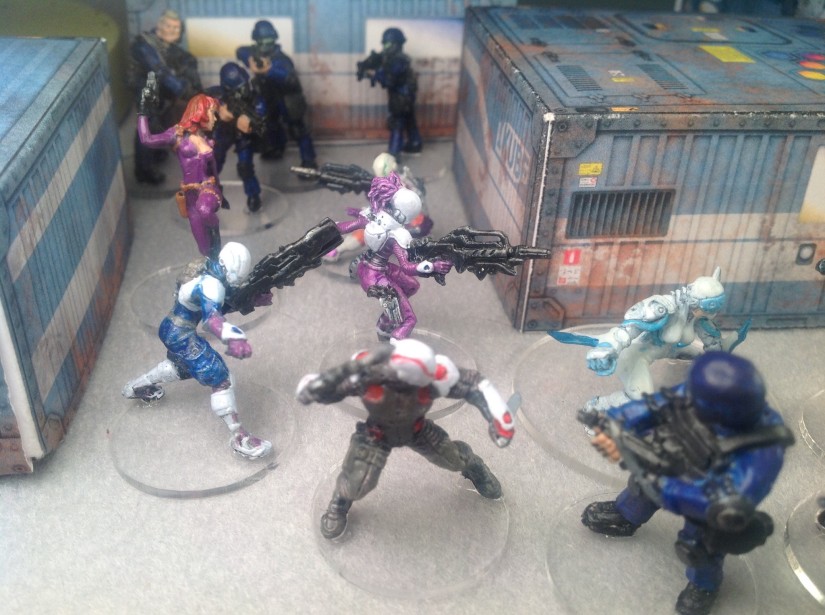 The terrain used in this post are paper (cardstock, actually) shipping containers that have been converted into habitats.  They from a line called IKUBE by TopoSolitario.com

They come in half a dozen different color schemes and they are FREE!  You could build an entire shanty town for Sci-Fi, Post-Apoc and Zombie games using these delightful models.

I really do hope you are enjoying the story.  It’s been a while since I’ve done one.  Please do leave a comment or hit the like button to let me know what you think.

Pictures were taken using my iPad, and no Floozies were harmed in the making of this post, but halfway through the Floozy did discover she had a piece of lettuce stuck to her teeth.